Support Us
Follow Us On Social Media
Reading Time: 5 minutes

My dad’s time as a contract field worker was extremely tough. There are a couple of things I didn’t include in the previous post that I wanted to bring up.

My dad’s trips to the grocery store with the 12 others in the van without AC were typically made after a day’s work. This meant that they would not have time to make it to their communal home and shower but rather show up at the store with their clothes dusty, their hands dirty and sometimes injured with dried up blood from the tough work of the day, and of course the body odor of being out in the sun for 10+ hours. My dad remembers the looks of disgust other shoppers would give them. I reflect and wish that those looks would have been of kindness and not disgust.

Also, my dad’s annual trip was not only working in tobacco. Once tobacco ended around September, his group would be signed up to work on sweet potato fields for the rest of their time until the end of October. They would be paid a whopping $0.30 per bucket. You can see the image below for a rough estimate of what that equated out to be. If you follow the link you can read up on more about the sweet potato industry.

If you bothered to do the math, for my dad to make a decent $80 a day he needed to haul in a minimum of 270 buckets. Based on the data from Dan Charles with NPR, that means he would lift about 8,100 lbs. The article that I got the image above says that a typical day’s work involves hauling 400 to 500 buckets a day. That can be 15,000 lbs in exchange for about $150.

My dad was thankfully wrapping up his final year in October 1999 after my mom and I had been living in Chicago, IL since April 1999. But, the intense labor had already done its toll on my dad’s body. The only thing on his mind was having the opportunity to be reunited with his wife and son. He went to Chicago and we stayed for about months. Both my parents picked up some jobs in Chicago. My mom found work at a hotel and my dad would work with his brothers-in-law in carpentry and construction. I experienced my first snow in the winter of 1999 in Chicago.

At some point, my parents decided they wanted to return to North Carolina. My mom had a couple of siblings somewhat established so we booked a flight for the three of us en route to Newton Grove, North Carolina. I turned five in North Carolina in that year.

Since my parents didn’t have a job secured when we arrived in NC we initially moved into a communal home of about 14 people. Most of them were strangers to me. I was the only kid in the home so I had a pretty good Christmas the year we arrived. We began renting a small single-wide trailer after a couple of weeks. My dad had started a job and my mom had too. They were by no means easy jobs. They still had labor-intensive work and long hours but they never caved. They kept working hard for the dream life they envisioned they would achieve for themselves and their son.

I started kindergarten that year too. I didn’t know anything beyond a few words in English so I was placed into what is known as an ESL class outside of my primary kindergarten class. ESL stands for English as a Second Language. Not only did I speak any English but my parents were still learning the language too. What this meant was that homework would take hours for me. Almost every night for that year my dad would stay up late after a long day of work with an English to Spanish dictionary in hand trying to make sense of what I had to do for my homework assignment. My favorite assignments were freestyle coloring pages.

At first, in school, I could only make friends with students that spoke Spanish. I also didn’t have my dad with me while I was at school so I almost always didn’t know what I was supposed to be doing. I had begun to pick up some words but the ESL teacher still had to come in from time to time to help me fully understand what my teacher, Mrs. Kimbro wanted me to do. One day I was given the task of drawing my house. My ESL teacher, Mrs. Tulia wasn’t around to explain my assignment to me but with the limited English I had begun to understand I knew that I couldn’t draw my house. My teacher questioned me over and over again. “Why can you not draw your house? Where do you live?” I kept trying to make her understand that I did not have a house. We went back and forth for a bit until Mrs. Tulia was called in.

At this point there was probably concerns of me being homeless and wondering if they needed to involve social services to investigate. Mrs. Tulia then asked me in Spanish why I couldn’t draw my house. I explained to her that I did not live in a house. I lived in a “traila.” Growing up I had been told that a “casa,” a house, is different from a “traila,” a trailer. Therefore I could not draw a house as they were asking me to because I lived in a trailer. Now, having established my home situation they then encouraged me to draw my “traila” instead of a house.

As I continued to learn more I managed to come home one day and as was custom inform my mom about my day. It was one of my mom’s happiest but saddest days when I told her, “Mami, ya no tengo que voltear a ver a los otros niños para saber que tengo que hacer.” With a calm face I told her that I didn’t need to look at the other kids to know what I had to do on my assignments anymore. I finally understood enough to know what my teacher was asking me to do. 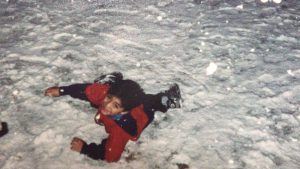 Thank you so much for continuing to read my blog. I have had some ideas for my Day to Day series and may focus a bit more on that before returning back to my Origin Story. There is so much detail I’m sure I left out so far but it has motivated me to sit down with my parents to get more details from them.

The support I have received has been incredible. Stay tuned for future posts!

About the Author
Oscar Romero
I have had DACA since early 2013. I am currently a Software Engineer at Red Ventures. I went to college at UNC Charlotte and graduated in 2017 with a BA in Mathematics and a minor in Computer Engineering. I went to high school in a small town out in eastern North Carolina. My parents brought me to the United States in 1999 when I was 3 years old. I grew up in NC and aspired to make something worthwhile out of my parent’s hard work and sacrifice.
Recent Articles
Feliz Año Nuevo: Personal Recap
01/18/2022
Growing Up With Immigrant Parents
11/14/2021
My Undocu Life Fundraiser for United We Dream
08/02/2021
Restaurando Esperanza – Part Two
07/18/2021
Restaurando Esperanza – Part One
07/18/2021
Real Estate as an Undocumented Individual
07/09/2021